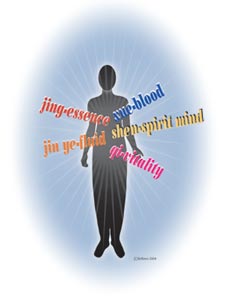 In humans, Qi can manifest both in physical form and in physiological, psychological, and spiritual functions. Individually, TCM refers to these energetic manifestations as "the vital substances." (They include the vital energies of qi and shen.)

Each vital substance is associated with a particular form and function in the body: