What Is the History of Chiropractic?

Chiropractic as a profession began in 1895 when its founder, Daniel David Palmer, “adjusted” the spine of a deaf janitor and claimed to restore his hearing. Spinal manipulation was not an unknown treatment in 1895, and Palmer never claimed to be the first to use manipulation for the cure of disease. He did claim, however, to be the first to use specific contacts as short-leverage points for making more specific spinal "adjustments."

Palmer founded the Palmer School of Chiropractic, where he taught his methods to the first chiropractors. These early years of the profession brought about a great deal of tension between conventional allopathic medicine and this new approach. Statutes to practice chiropractic were not established until later, though many chiropractors defiantly opposed the medical statutes they regarded as an infringement of their rights and obligations to serve their patients. Until the 1960s, it was not uncommon for chiropractors to be jailed and fined for practicing without a license. 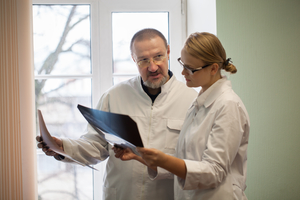 The more recent professional cooperation and mutual appreciation between chiropractic and conventional medicine lie in stark contrast to many years of discord. Cooperation and the collaborative care of patients are now quite common.

Interdisciplinary practices are now becoming more common in a variety of settings, with chiropractors, medical doctors, physical therapists, and others working as partners in occupational health, sports medicine teams, and rehabilitation centers.

Chiropractors may provide the primary intervention of manual therapy to normalize joint function in patients recovering from injuries, or they may work cooperatively, for example by providing manual therapy and nutritional guidance for patients undergoing chemotherapy.

Depictions and writings of spinal manipulative therapy can be traced back to ancient cultures.